After quite along hiatus I decided get some stuff going again. I will try to update more on the blog – as you can propably see on the history the last 2 years have not been very active.

With that out of the way I have finally made the decision to switch from Team Canon APS-C to Team Sony Full frame but I will definitely still be using my Canon Lenses with the Sigma MC-11 adapter, but lets get into some detail….

Back in 2006 when i decided to go DSLR I did make the right choice to invest in a rather cheap entry level DSLR and to focus my hard earned cash into decent lenses instead. Camera technology improves rapidly… but lenses can be a good long time investment.
I purchased my 2 mostly used lenses before a longer trip to Scandinavia (Denmark and mostly Norway) the Canon 17-40 4.0 L USM and the Canon 70-200 4.0 L USM – and I still use the to this day after 15 years…
At some point I upgraded to the EOS 500D and eventually the Canon EOS M5 making the switch to Mirrorless in 2018.

At this point Canon was running the EF, EF-S and M lenses and eventually adding the RF lenses. I bought the M5 Travel and Explore Kit which came with both the EF-M Adapter and the EF M18-150 IS STM.
The EF-M 18-150 was my first ever IS lens and in the end I never used it because I will never sacrifice Image quality for light gear. If I take a long trip I will go full in when it comes to camera gear as I learned to appreciate taking my full camera gear up onto glaciers and highlands.

The M5 was technologically a very noticeable upgrade with a lot of features like remote shooting, tiltable screen and other stuff which in the end I mostly never used.
The M5 was the clear choice vs the M50 or the M6 back then because I shoot with a view finder 90% of the time and getting an extra viewfinder and attaching it did not sound like a viable option to me.

A bit later Canon revealed the EOS R with another set of lens and my next future upgrade was most likely going to be Full Frame and when i was considering getting a new camera in August 2021 the R series was definitely on the scope.
The Upgrade from the M5 was definitley going to happen as I was not happy with the ISO performance especially with Astrophotography being one of my favorite activities. I will include the update with some comparisons later.

Another negative for me was the handling of the M5 – with a big lens attached it just feels very awkward and I was not really happy with the build quality. For street photography the M5 is still a great choice especially with the EF-M 22m 2.0 pancake which gives you the classic 35mm on APS-C on a very low profile setup.

I did decide to take the 28-70 kit lens along as I was yet to make some experience with – a decision which i mostly not necessarily regret but the end up in on-dmenad-standby and never being really used.

Here are some interesting facts regarding lenses I used in the past 15 years that i pulled of the metadata in lightroom with some additional info:

– the statistic may be off a bit as I did count both Raw and Jpegs but even since 2006 I hardly ever shoot in jpg and mostly its on accident or just take the occassional snapshot in Auto mode
– in some cases I did not get a good exif read regarding the make of the lenses but – yeah a 17-40mm in the exif data is pretty obvious. The only real confusion here was mostly on 50mm where over time I upgraded the old Canon EF 50mm 1.8 to the Canon 50mm 1.8 STM
-my Samyang 14mm F2.8 is not included as it does not write into exif data 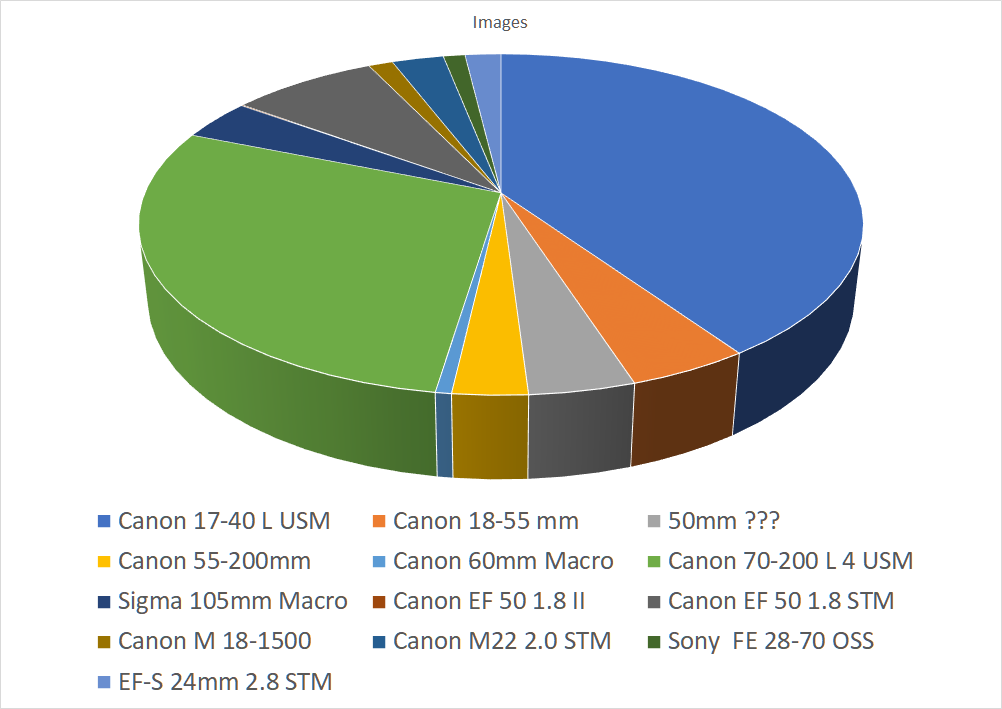